Spring is a great time to run. Training through the winter takes more effort, maximum clothes and, in my case, a well-used headlamp. Only weekends allow daylight running, and the occasional foray onto coastal trails are inevitably muddy, with a cutting wind, chilled by its journey over the waters of Chichester Harbour and the Channel. Gunmetal skies; gunmetal sea; frosted mud and steaming shoulders. I have always treated winter training as my base-level regime. A run of 10 or 11 miles is my longest during these dark days, taken at an easy pace to build up enough strength and stamina to cope with tuning for my summer targets.

My main aim this year was to run my first organized ultramarathon – the Race to the King. After recovering from a flu virus in the first half of January, running became easy once more. February proved I was back on track and long runs between 10 and 12 miles were almost pain free, if slightly slow. I continued to have a niggly lower back, but I now accept that when I run these aches go away (until later, when sitting down reveals where the aches are.) In March a bout of heavy gardening found my weak point again: my back seized up. This meant a return to Charles, my brilliant physio, to be repaired and unlocked. I was wondering why I kept breaking down – the muscles and tendons that were hurting were never obvious running-related injuries.

I put this to the back of my mind as March progressed and I started to gather and use new ultramarathon kit, testing it out for the big one in June. I took to the local trails and made a coastal run around Thorney Island my principle route – varied terrain consisting of mud, grass, shingle, sand, flint-knobbled hard bits and scrub. The main loop is 10 miles, but I could stretch it by running around Cobnor Point towards Bosham. Finally, my fitness was building and I felt no weariness on long runs. After a hard 16-mile coastal run on a warm, sunny day on 30th March I found a local race – the Goodwood Running Grand Prix Marathon. So, with no proper preparation, I entered and aimed to survive it during heavy training just to see where I was. 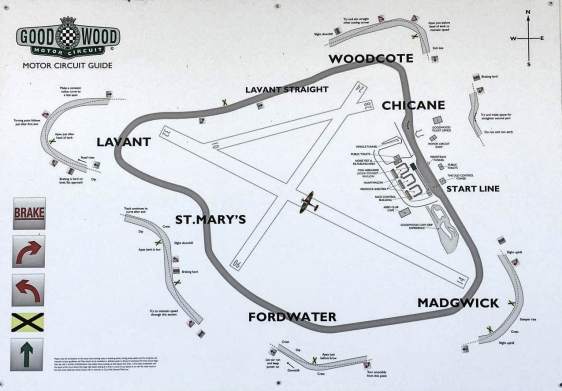 On 14th April I was at the start line on the Goodwood Motor Racing Circuit. It was sunny, but there was a freezing easterly wind blowing. I had no idea what sort of speed I would be running and would be happy with a 4:50:00 in comfort. This was my first organized marathon since Brussels 1990 where I ran 3:06:55. At the time I was a bit miffed at how slow I was! 29 years later that time looks incredible so now I had to see what the 62-year-old me could manage. The horn sounded and ahead lay 11 laps of a relatively flat circuit, with one gentle rise, but 11 slogs into that freezing wind. I ran with a chap called Joe, who was training for a 100 miler, and he got us into a steady rhythm which I was pleased to stay with. The first 20 miles went by at 10:00-10:10 pace. I was more than happy as this had recently become my best training speed. The last 6 miles were harder, so I let Joe go and eased up a little. My time was 4:30:47 – an average of 10:20s – I was more than happy with that.

Back along, after a marathon, even last year after the 31km Alónnisos Challenge, it was normal to hurt for a week – being in agony going down stairs, and generally surviving on sore power muscles. After Goodwood I had no pain and could train with little trouble. I was on the right track to complete an ultra.

8 days later I did a harder run – 20 miles of trails in the heat including a double lap of Thorney Island. I ran well, but at 15 miles tripped on a sticky-out piece of flint and hit the ground hard. I lay winded and for a moment thought I had cracked a rib. I had a brief vision of the Reaper Man standing over me, but he fled to the sound of the breeze in the grass and singing skylarks. My hand was bleeding and I’d cut my right knee. I set off again determined to finish the run whilst being more careful. At 17 miles I did the very same thing. I lay there in the grass bleeding and started to chuckle – what a plank! Nothing major hurt so I limped on and finished well enough. Subsequently I found I had bruised some intercostal muscles, yet it could have been much worse After a clean-up session and the application of a single plaster, I was fine.  But the Reaper Man has allies…

On the next morning’s commute, the carriage was full of coughing, sneezing people. I eyed the culprits malevolently. That evening I was bone-weary. I could not train. The next day I was just plain wiped out. Then, in the space of 24 hours, I had a raging sore throat. I missed a whole week’s training.

Once I felt well I had a gentle 4-mile jog and was alright. The next morning my left knee was agony! I was astounded. I’ve never had a knee problem and this had come out-of-the-blue. Frantic icing and compression did nothing. I had five days before flying out to Greece for a holiday. It cleared up very quickly – then I slipped on the stairs and hurt my right patella tendon! No chance of running until I reached ancient Ikos, Alónnisos as it is now known. I only had one run on the trails whilst I was away. This showed me one thing – I had lost too many key training weeks, rapidly losing fitness and with it confidence.

Upon my return home I decided, with heavy heart and brutal logic, to defer my entry for the Race to the King until next year. That is life as an older runner. Grimly depressed I had a day of self-pity and determined to give up…. But something Churchill wrote became relevant:

“Never give up on something that you can’t go a day without thinking about.”

I couldn’t so I didn’t – there is a second Goodwood Grand Prix Marathon in September – I’m already planning, and back to running again. King Alfred can wait another year for me, I am sure. Thus, the Reaper Man remains a shadow, but as long as he is behind he will have to match me, stride for stride, to keep up.

As an afterthought I reread my training log for the last year. The tendon that hurt in my knee was the iliotibial band, I’m sure. But why would it flare up to agony, then just go? I believe I have my answer. Since taking Ciprofloxacin last spring, every time I get a virus a tendon becomes inflamed for no apparent reason. I started the year with flu, and my hip flexor flared along with my sciatic nerve. This time my IT band at its junction in the knee. Simultaneously my right foot aches – a residual effect of Ciprofloxacin that has never completely left. This rare, but all-to-painful after effect, seems to have remained with me – all I can hope is that it wears off with time. Most of the research I have read indicates it probably will.

I enjoyed my time on Ikos. Of that I will write in my next post. In the meantime, postponing the ultramarathon until next year seems wiser to me now. By 2020 the Ciprofloxacin effect on my system will be less of a bother, I hope, so all I can do now is enjoy the summer and test myself on my local trails. As Kostas Cavaffy shows in his lovely poem, Ithaka, it is the journey that is most important. And as I have shown keeping ahead of the Reaper Man ensures the journey continues.