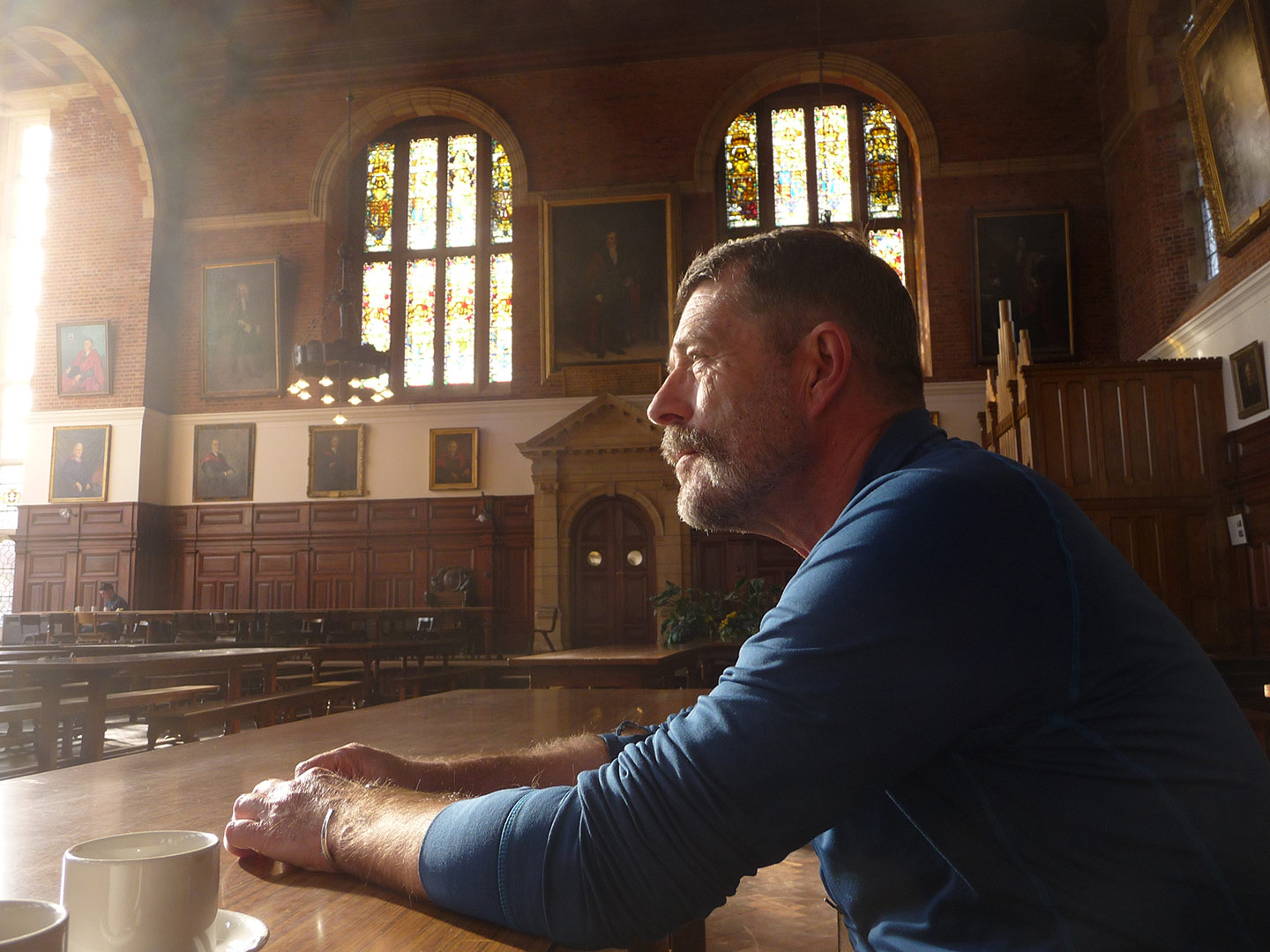 In hallowed halls I stopped to think,
From windows Spring’s sun shone on me,
And there I sat amidst the wise,
Old heads looked down and made me see,
The Reaper Man is there to race,
And he is bearing down on me,
I have to Race the Reaper Man,
And every step will keep me free.

In ‘The fall and rise to 60’ I wrote with hopeful words in order to put a full stop to my demise. This normally works for me – a line in the sand from which to move forward. Unbeknownst to me I had only fallen halfway, and my ‘rise to 60’ was but a vision of the future. My workload accelerated me towards a world of pain, and the faster my mind worked, the slower my progress. By December 15th 2016 the Reaper Man touched my shadow. I had let him get too close, and everything bad happened.

Running has always been my barometer of how I am. The joy of this primal, primary forward movement is only possible if ones body and mind work together. Mind says it will make you fit; body moves to a brighter future in spite of the initial pain. Mind and body get well together. The fat burns away and confidence is repayment for the effort involved. Eventually, and I promise this is true, you will be so in tune with yourself that any glitch whilst trotting along is quickly detected. By the end of 2016 my running was sporadic and every step was forced from a broken machine. All in all I had a series of 5 viruses, the last a monster infection at Christmas. I had developed a first ever boil on my back, the cancer wound was healing slowly and my sense of smell had been lost in September. Physically everything had broken. My mind followed and extreme tiredness, dark moods and an ever ‘flat battery’ hung over me. Finally I had to see my doctor.

In a nutshell I had burnt out. I had worked myself into the ground and once my physical strength had given out, my mind could cope no more. Running was a forgotten friend I had ignored – I should have known what was happening, my running told me. After a series of precautionary tests, there was no hesitation of signing me off work with strict orders to recover.

I will give an in-depth account of what finally happened in my book, but suffice to say it took me two months to understand that recovery was not just a case of resting. I had to confront my own failure to do the things that mattered and of trusting those who saw me as expendable. In doing this I had sacrificed my happiness and was robbed of my smile.

Finally I formed a plan and set a goal for which forward progress was necessary. In March 2017 I reached my line-in-the-sand in good enough order to have a base of fitness. I started running properly in February and on 14th March ran my 11th 10 miler of the year breaking through the 33,000 mile barrier of miles completed since I started way back in 1982. I am not yet fully recovered, but physically this week marks my start to race again in 2018. I have changed. The baggage of career has been put down and I now spend time contemplating my new start. This new adventure. The best thing is I have had to start from the lowest point of my life, so it will make my training to race day an absolute journey from a blank slate to success or failure. Starting at 33,000 miles seems to be a daft idea, but burnout, as I have found, destroys everything. Yet the Reaper Man has lost some ground. It’s time to embrace my best friend and run…

Run west from the Devil by Chris Lashelle. From the DVD Unbreakable – Western States 100

The Devil he knows my name,
He says that he’s come for me,
I’ve tried hard to run away,
West through the mountains,
I can make it,
Then the doubt creeps in – deep inside,
But I’m still alive…I’m still alive.

The Devil keeps chasing me,
And I keep pushing through this pain,
He tempts me to lie down and die,
Putting an end to my struggling mind…

The Devil is chasing me,
Through valleys of falling trees,
With rivers to cross too deep,
And faith now I’m finding that I can make it,
There’s no doubt inside,
And just in time – I have survived.