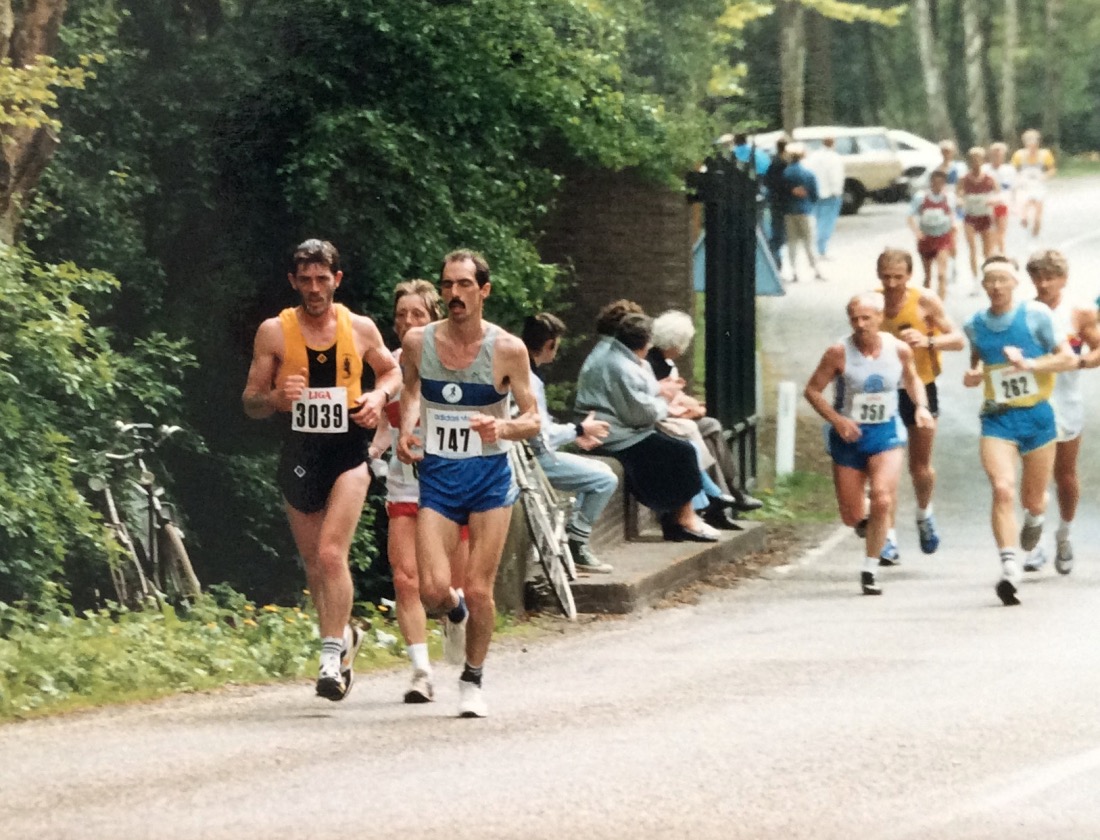 My slow descent to 20 years in the wilderness started in what could have been my best year ever: 1987. I was 30 and at my peak but, with hindsight, several things happened which, to a wiser, more mature person, would have rung alarm bells. I’d passed my driving test and had a car. For once I had a little spare cash and it was great to be able to take my young family on trips that didn’t involve cycling. I stopped the ride to work as well, so was losing a little training. Yet I followed my successful schedule from the previous year and entered the Amsterdam Marathon. It would be flat! I ambitiously set 2:48:00 as my new goal and set about making it happen. A 1:18:40  half marathon showed I was on course and, even without cycling to work, my endurance seemed fine. Unbeknownst to me, I was using banked credit: effectively carrying the previous year’s conditioning with me.

12 years of shift work in a brutal recurring programme (6 mornings-2 off-6 nights-2 off-6 afternoons-2 off, then on again with mornings) had isolated me from the regular world. Cracks were showing in my marriage and I never recognised the severity of the symptoms. Yet, I arrived at the start of the Amsterdam Marathon and made one small error – on a cold May day, in a country where the wind blows over chilled water, I wore a brief half-mesh vest, shorts and no base layer. I set off at a fast, even pace, and settled in with a few runners who could clip out 6:10 miles. Halfway in 1:21:20 and I was flying! It was around 20 miles that a huge stitch hit me in the upper ribs and, even though I was full of energy, slowed to 8 minutes-a-mile. The chill was to blame; I had cramped in my least active muscles and had to watch runners go by. Then, with 3.5 miles left the stitch went and my pace soared back to 6:15s, but the damage was done and my final time was 2:51:32. I’ve recalculated what could have been over the years. Those 3 8-minute-miles added, probably, 4.5 minutes to what I was in shape to do. That stitch! 2:46 was on the cards, but it was not to be. I never broke 3 hours again.

By the start of the 90s my world fell apart. Divorce and its endless repercussions had pushed running into an unstructured heap in a corner and by the end of the 90s I’d stopped racing at all. What a decade! Traveling and embracing new worlds were heavily tempered by a second divorce, a socialising habit fuelled by drinking and living at 9 different addresses. But I kept running and stayed in reasonable shape. The hardest thing to deal with was my lack of confidence in being true to myself. I constantly tried to adjust to other’s expectations, but I could only maintain such emotional ruses for a few months. From 1992 to 2002 my average relationship lasted less than a year and at the end of that time the fitness I had banked was at an end. In 2001 I ran fewer than 100 miles.

I’d lost everything twice over. My energy, once used for running well, was focussed on rebuilding my life. At one point I was surviving on less than £30 a week after fulfilling my financial responsibilities. During that period I discovered my rather blinkered drive to fitness had caused resentment in some quarters, something that, up to that point, had never really registered. Three words became the crowing triumph from some of those I considered friends. I had the same phrase fired at me several times – “You are finished!” I started to realise my perception of life was not how things really were. Those words stuck.

By now I was commuting to my home county from a new life in West Sussex. My partner was a heavy drinker and my own drinking became exceptional. I even started smoking cigars and, once the drink had really soaked into the relationship, I ballooned to nearly 16 stones (224lbs/101kg). Even so, I still ran sporadically and lifted big weights in my local gym. Yet, by now all the banked fitness had gone. I ran, just to be fit enough to run. There was no joy, just habit. I reached my lowest point in 2008.

In 2007 I had left my job of 29 years and became a Civil Servant in West Sussex. My body was a mess. Health problems appeared and by the end of 2008 I had high blood pressure, a hiatus hernia and struggled lacing up my shoes. I also hated myself. Trying to conform to other people’s ideas, driven by the need to be accepted, had only made me betray what actually is me. “You are finished!” It was used again and again. And, I suppose, if life is judged in the short term, I was. Hindsight is a wonderful thing and I can now see clearly what the issue was. If one is fit and healthy, driven and fundamentally prone to laughter, many people resent it. Not even knowingly. When someone like that falls, it justifies personal biases about one’s own lack of self-preservation. But that knowledge was still some years away.

At the very start of 2009, having reached my lowest point, a light came on somewhere in the dusty recesses of my mind. Racing the Reaper Man, as a concept was born and I woke up. Just as well as I was slowly killing myself and my metaphorical Reaper Man was just inches from catching me. Five more years would pass before I found a consistent way back, but even that was full of pitfalls, unseen events and several giant stumbles. I became my own experiment.